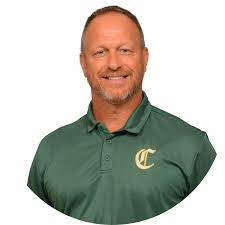 Join us at Sullivans on the Hill at 5:30 as  we welcome speaker Jason Surlas, Knoxville Catholic HD Athletic Director.

Jason was born and raised just outside of Pittsburgh, PA. Played football, basketball, and ran track all four years of high school. He comes from an athletic family. Dad Tom Surlas was an All-American Linebacker at Alabama. Older Brother J.J. Surlas was a 4-year starter Defensive Lineman at Tennessee. And younger sister Jen Surlas was an All-Conference basketball player at George Mason. Jason played football at Ellsworth College in Iowa Falls, IA, and later signed with Eastern Kentucky University. After his football career really never materialized due to multiple knee injuries (both in High School and College), he entered the work force, but continued to be active in football while volunteering to coach youth football teams in Pennsylvania after college. And then continued to coach when he moved to Tennessee in 1993.
In 2001, he joined the Knoxville Catholic High School football coaching staff as a Non-Faculty coach, then in 2006 was hired as the school’s Athletic Director and is presently in his 17th year in that role. He has also served as the head coach of track and field and assistant football coach at various times over those 16 and a half years.
Knoxville Catholic High School has won 21 State Championships in 9 different sports and 8 Gatorade High School Players of the Year for Tennessee during Jason’s tenure at KCHS. Prior to that, the school did not have a State Championship, and only 1 Gatorade Player of the Year. Since 2006, almost 300 student-athletes have signed to continue their athletics careers at the collegiate level, and 6 are currently playing sports professionally, with a few more on the way soon.
Jason met his beautiful bride Lindsey of 19 years in Knoxville and they have two children Chloe (17) and Chase (15), both of whom are enrolled at Knoxville Catholic. Chloe is a junior, and Chase is a sophomore.
0 Likes